Perhaps not the worst guitar I’ve had on the bench but you can tell from all the details it’s not genuine..

At first glance it looks OK.

Just take a look at the jack plate, and the lack of quality in the finish.

The screws on the scratchplate haven’t been put in very accurately.

The logo isn’t quite in the right place, the hole for the truss-rod isn’t very cleanly cut and that string tree isn’t so good.

Those things are superficial but the fact that the fret tops are very uneven isn’t.  It’s never going to play well like that.

Someone has had a go at the frets, some of the tops are quite flat.  Unfortunately, they’re still rather uneven. 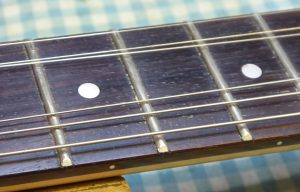 The nut isn’t sitting very neatly in it’s slot either. 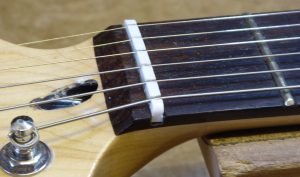 So that’s my starting point.  Clean up the slot… 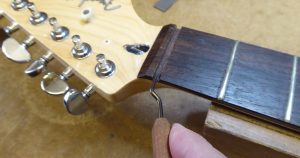 Flatten the bottom of the slot, later I’m going to fit a new bone nut.  Before that though, I need to sort out those frets.

First thing to do is make sure the neck is completely flat.

I tape up the fret-board to protect it and put black marker on the fret tops so that I can see where the file is touching.

This is about half way through, you can see from where there is still black marker where the low spots are.

Once the frets are all even they each need to be re-rounded off.

With that done each one has to be polished with four different grades of micromesh cloth.

With all that done it’s time to put it all back together and carry out a 5 point setup.

The neck relief was quite simple. sometimes these cheap necks can have quite sticky truss-rods though.

Setting up the tremolo bridge can be difficult with these cheaper parts as well.  The tolerances on all the screws and parts are just that much looser.

Back to that nut:  I left the slots quite shallow so once the rest of the setup is done I can work out exactly how deep to cut them. 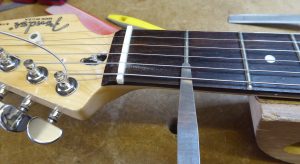 The one last item is the height of the pickups, to make sure the outputs are suitably balanced. 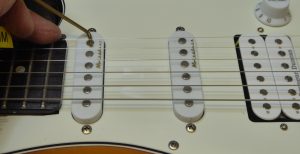 So there it is, took a little doing but plays quite nicely now.