They say flying is easy, it’s the landing that can bight!  Well this Flying V may have flown well but it must have been a hard landing!

I’m not sure what happened but the neck pocket has been split along the line of the neck.

It should have been quite simple.  I opened up the split and injected some glue down into the splits. 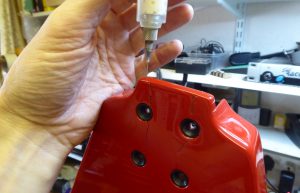 With it clamped back together let the glue thoroughly dry. 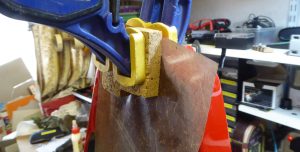 It looked quite good.  Unfortunately, when the strings were back on and at tension the splits both opened up again.

So I again cleaned out the splits as much as I could and injected some thinned down glue into the splits.  I’ve also come up with a plan to add a little more strength by adding a neck plate. Unfortunately the spacing of the holes don’t quite line up so I’ll have to plug the existing holes and re-drill a new set.

I also needed to cut down  2 of the screws so that they don’t poke out too far under the neck pickup.

With the neck back in place it needs now is a full setup and it’s ready to go.

So there it is.  Took a little more than I first thought but recovered and playable again..